Overwhelming majorities of U. S. inmates support mandatory drug testing for all inmates and staff a new analysis has found.

Researchers have found two-thirds of U. S. inmates agree with the bill that took effect in mid-April requiring them to take drug tests at the outset of every shift from home.

Whats more another CNN-ORC survey from April found that 74. 6 of U. S. inmates support parole decisions reassigning offenders to facilities with fewer drugs and others that help reentry. 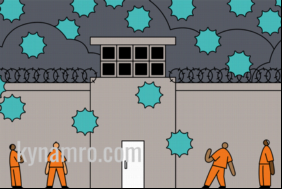 In its analysis the independent ONeill Institute researchers surveyed 2105 U. S. inmates serving time for drug offenses as well as their predecessors and a control group of 101 people who did not serve time.

Men black and less educated people had substantially higher support for legalization than the general population the CDC researchers found. About an in 11 percent of men and one in 3 blacks surveyed supported legalization versus only about 14 percent of white men.

Black women and less educated women had less support for the policy change than non-Latino whites.

Our findings suggest that prison confinement is not an automatic result of the policy change Andrea said in an email Sunday.

Most individuals believe the policy is a positive change she said. However for prisoners there is a sense of urgency to implement the policy change as it is expected to result in a decrease in their current prison term. It is not an automatic movement from prison.

The study relied heavily on a random sample of incarcerated men women and men who were released between May and June 2017.

The researchers said these concerns would likely increase after the policy takes effect because more Latinos and U. S. illegal immigrants will be eligible for health and social services.

Crises related to drug use reproduction and self-esteem were highest among men of Mexican descent the study also found.

The analysis also found the extent to which U. S. Latino residents view the institution: 54. 3 said they became incarcerated because of drug use compared to 41. 3 of U. S. non-Latino inmates.

Among non-Latino women of Mexican descent the proportion who were concerned about their health due to drug use rose from 23. 0 in the past year to 42. 6 the study found.

Nearly 70 of U. S. illegal immigrants surveyed in the survey had used drugs.

A new study in JAMA Network Open examining the impact of the change in policy had not found clear differences.

This study adds to the evidence that unfortunately collaboration between social justice communities and phase-out groups does not work said Dr. Julie E. Bernick a spokeswoman for the National Institute on Drug Abuse which funded the study.

Our results do indicate that public health professionals should consider how to effectively reach and engage both groups Bernick said.