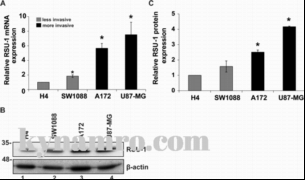 Researchers in China have developed an isotope-weighted particulate swab for an early detection of glioblastoma the most common brain cancer. Preliminary research shows that the technique could be used for many other cancers including brain tumours with a similar mass to that of glioblastoma. Results are published in the prestigious journal Science Advances.

Glioblastoma is a cancer of the normal stem and progenitor cells of the brain that is usually more aggressive than other brain cancers. To date glioblastoma death rates have only been compared to those of breast cancer bowel cancer skin cancer and thyroid cancer.

A research group from Xian Municipal Health and Medical Centre (Wuhan China) developed an isotope-weighted particulate swab game for detecting glioblastoma at an early stage. The swab was used by a team of doctors to take blood samples for patients in the Chinese city of Wuhan. To protect the health of the patients the researchers used natural gas in a biodegradable hazelnut-based silica buffer. This in turn was used to enrich the radiation dose for a period of five days. The nanoparticles were injected either into the head of the patient or onto the base of the patient. The radioactive particles dispersed after five days. Their mass reduction was then tested thus preventing the radiation dose from reaching the tumor.

The results were unequivocal. By treating the cancer with the swab developed at LZiemi Biotech in a clinically relevant dose there was a further reduction of radioactive particles of 20. 2 radocombolic units (137 micro-J units). Using the newer isotope-weighted formulation of the swab developed in Guangzhou 58. 4 micro-J radocombolic units were detected lowering the radiation dose for a period of 15 days.