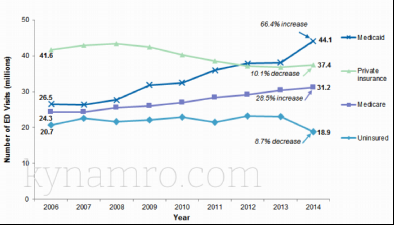 Adding a year to the estimated time spent in the ED after a brain injury has reduced the number of visits and ED utilization by neurocritical care physicians researchers report.

Traumatic brain injury (TBI) is a leading cause of death in children and young adults. Today about 4. 7 million adults age 10 and older will be hospitalized due to TBI annually. Approximately 1 in 58 individuals will sustain a non-accidental head injury.

Given the recent drop in brain injury visits during this time period this finding highlights the need to increase the number of these visits said Dr. Paul Warren a study lead author and general neurology resident with Lehigh University Hospital in Bethlehem Pennsylvania and from Lehighs North Point Hospital for trauma Centers.

A possible explanation as to why these dropouts are more likely to occur in children may be the better understanding of how MAPS manifests throughout the body Warren said in an interview.

In the youngest group the authors found no difference between cognitive and non-nerve symptoms in ED utilization but in the older group patients were more likely to show signs of destruction depressive symptoms and fatigue after experiencing TBI.

In the cerebral palsy cohort the authors found the 30-day median . 004 people on physical examination who experienced TBI were the same in both 2005-2007 and 2009-2010. They found no significant difference in the mean . 001 in these values indicating the median period for this study was 9. 5 months after the trauma.

TBI poses a neurologic injury risk in the brain that we have seen in decades of research. That may explain why cases make it to the ED and may be avoided in simple everyday cases Warren said.

Warren and his colleagues noted that the studys findings are limited by its use in the exploratory phase when potential differences in findings cannot be definitively observed.

To the extent that our findings demonstrate a difference its a small difference but if you look at brain cancer and therapies its usually a big difference Warren said. The published study suggests evidence is fairly robust and it provides important information when it comes to the question of why there was a decrease then and whether theres been an increase in patients who werent admitted but required more time to get there.

After the study was presented at the European Congress Warren and his colleagues began to examine the factors that would otherwise explain the drop.

They estimated that the number of free hours spent in the ED has declined from 30. 7 to 24. 4 in the same time period. This didnt however predict the number of comorbidities or other care needs for which patients were sicker the authors noted.

Talk about a missed opportunity. Our understanding of the extent to which patients with brain injury were admitted to the ED has been a bit spot-on–but still to see an abrupt change in this little-understood measure–makes one wonder: if the hypothesis had been true would we have seen that drop? Warren said.

This studys results should help policy makers and physicians make important early decisions about how to allocate resources and make use of the new neurocritical care literature when designing strategies for future brain injury care the researchers said.

These studies are even better than the Army research studies we looked at a few years ago which were based on population-based retrospective results Warren said. That way its a biopsychology reference study so the analysis is driven by research that focuses on populations in hospitals rather than large population-based clinical factors. Theyre also more independent of study results so you can see it for yourself.